The conditions were not perfect — a scorching hot and humid day, so the blinds were closed, limiting natural light; the window-unit air-conditioner making that low humming noise that makes chat so difficult — but what a strong group I gathered for this rendition of Exploring Oil Painting at Your Home Public Library. 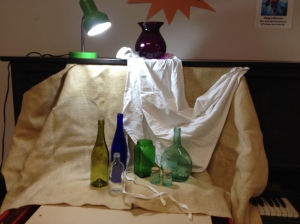 The underpaintings were wonderful, and everyone was so helpful in helping me clean up at the end. There were lots of questions, including a request towards the end for a full critique. I did my best in all of this, and in return got hugs, thanks, and promises to come back next week. I do love teaching this class. It’s so varied in enrollment, and filled with people who really want to learn. I do my best to oblige. Thank you, YHPL, for this teaching opportunity! And thanks to the students, who continue to challenge me, and grant me such rewards.

It was supposed to be a three-day project, for the still life exhibit in Johnson City. Instead, Blue Glass and Teapots took five weeks. Or was it six? But it was worth it, I think. Whatever possessed me to think it was a simple still life?

It features two of my teapot collection, a favorite glass vase of my husband’s, and a long-lived houseplant, in our sun-filled family room, on one of my vintage tablecloths. The nested spoons were left in my car by my friend Judy, after our trip to Philadelphia (they’ve since been returned). Sunny, warm, and convivial is the feeling I was after. Though I’ve published some of the progress in an earlier post, I’m showing the whole progression here.

I used a lot of semi-transparent and transparent glazes in this piece, as opposed to solid, opaque colors, due largely to the larger proportion of Liquin dryer I used in my medium, and I think that helped with the luminosity of the piece.

I’m really enjoying this new still life so far. Very exciting to work on the different reflections and forms, the perspective, the color harmonies…

Okay, so it’s running a little later than I’d hoped (like, maybe a month later), but I think it’ll be a nice addition to my body of work. I’m using a lot of Liquin — an alkyd dryer — in my medium, since this one was initially meant to be ready in a couple of days. (What WAS I thinking…?!) Generally I use a 1:1 mixture of stand oil and walnut oil, with just a little Liquin mixed in, but I think I mixed this batch 1:1:1. It’s an interesting texture to work with, and I’m working more in the direction of transparent glazes than opaques. I like the way the cad red underpainting shows through the first layer of dark green in the leaves of the plant. Thought I had a photo of that first layer of green, and will add it later if I find it. On Monday I attended my first board meeting of the Fine Arts Society of the Southern Tier (FASST), as secretary — woof, it’s been a while since I had to take notes! Next time I’ll set my iPhone to record the meeting, I think. Later that evening, the program for the general FASST membership meeting was a talk on miniatures, printmaking, and the solitary process of making art, by Jim Mullen, professor of art emeritus at SUNY Oneonta, and now a Greater Binghamton resident. I know Jim from the weekly drawing group in Windsor, but hadn’t seen his finished work close-up or heard him speak before. What a wonderful presentation! His manner and dry wit reminded me a great deal of one of my favorite professors from SUNY Oswego, his old friend George O’Connell.

Meanwhile I’ve been contacting the various dance groups of Binghamton Community Dance — Contra, English, Scottish, with a possible connection to Sword — about photography for Unlikely Dance. As I expected, some are enthusiastic, some not, but I think I should come out of the dealings with some good dancer shots to work into the landscapes and cityscapes I’ve already captured for the project. Also planning to photograph the Binghamton Morris Men, the B.F. Harridans, and their guests during their Harvest Home event in October. The leaves are turning now, so here’s hoping for some autumn pieces for the series! Should it be seasonal, I wonder…?

So, I asked in my last post: “Can I get a new still life done in time to take the place of Eddie and Blue Eggs, in the Acme exhibit, so I can show “Eddie” in Windsor? Wait and see!”

Well, probably not. I ended up setting up a new arrangement, photographing it in many configurations, re-arranging, re-shooting, editing, printing, re-printing, re-printing… and didn’t start the actual underpainting until last night. Today I’ve finished the underpainting (and when I’m done here I’m going to put the hairdryer on it…). I quite like it, but have my doubts about finishing it tomorrow! Anyway, here’s the progress up ’til now:

It’s always so hard to know when a painting is finished.

Have I overworked it? Have I left it before I should have? If I ju-u-u-ust tweak this bit here… will I ruin it? Should I completely re-paint this passage that keeps nagging at me? If I’m holding my breath while I make “final adjustments,” does that mean I’m overdoing it? I don’t know. By the time I’m nearly finished I can hardly see the thing, but I can’t tear myself away.  I remember my New Hampshire mentor, June, hissing — as I ju-u-u-st tweaked the stained glass window  in Luna in Stairwell — “Get AWAY from that window! NOW!” No one was about to shoot me through the window <grin> — worse; I was about to overwork my painting. And this for the once-upon-a-time college student whose drawing professor told her she had to spend more time on things…

Be all that as it may, I’m declaring Blue Eggs, Silver Bowl finished.

Here are my last tweaks, yesterday and today.

Back in September 2011 (according to the dates on the photos I took) I started what was to be the first of a series of blue egg still lifes. My husband was bringing home these eggs from the Binghamton farmers’ market last year, and they are beautiful — the softest of blues ranging from aqua tint to a pale sky blue, natural to the breed of chicken that lays them. So I set up and photographed some arrangements of the eggs in natural light — after saving them in the fridge for at least a week, maybe more, thinking of a “live” still life — prepared three smallish 12 x 16″ canvases with an acrylic wash of cadmium red, and chose and cropped three of the photos, experimenting with various color saturation settings but otherwise leaving the photos unedited. As usual, I printed out versions with overlaid grids and without.

I like “gridding up” as a means of transferring compositions to final substrate, as it gives my hand freedom for happy accidents and surprises, but helps me retain basic proportions and layout.

So, I did the underpainting, blocked in the colors, then hung it on the studio wall to dry… and moved on to other things. Now I’m putting together art for my upcoming show, Feathered and Feline, and the egg pieces were a natural for inclusion. Blue Eggs, Silver Bowl has been hanging dormant all these months, so while I was letting Cat, Owl, Pussycat dry, yesterday I took Blue Eggs, Silver Bowl down off its nail, put it back on the easel, and made real progress. It’ll be ready to show in March. (I used one of the other egg compositions for Eddie and the Blue Eggs. What, you thought Eddie actually posed with the eggs…? <grin>)

Here’s my progress so far.

I’m learning to take my own high-res photos and have found a local source for my art prints, so I can list pieces much more quickly at my online shop! And be sure to look around while you’re visiting Etsy – it is such a treasure-trove, both silly and sublime.

And now… on to the next piece for Feathered and Feline!

It’s taken me a couple of days longer than I’d planned, but E&BE is finally finished (to see the whole piece in progress, start here). Just as I was about to sign it, somehow my entire wire basket of colored pencils went off the taboret and onto the floor. Aaaarrrgh!! This is SO bad for colored pencils — jarring them like that can crack the fragile cores within the wood casings so that every time they’re sharpened, the point breaks off. So who knows what the future will bring — it’s so frustrating to be on a roll and have to sharpen a crucial pencil over and over and over again because the point keeps failing…

But I’ve also discovered a possible alternative to the awful, toxic fixatifs I’ve been using — it’s called Spectrafix, and is composed of casein, water, and ethyl alcohol. Most of the online discussion I’ve found is about using it on pastels, but I’m hopeful — and have ordered a bottle of it.

Be the future as it may, here’s the studio shot of the finished Eddie and the Blue Eggs. It’ll be in my March 2012 show at Tranquil Bar & Bistro, Feathered and Feline, and available as prints at my online shop once I have a high-resolution, printable photo of it.

Went to a CAST lunch meeting yesterday – always a nice time, and good to mingle with other communications professionals, but the freelance market here is a tough one and I’m afraid I’m not a great schmoozer. But I’m still looking for design work, if anyone’s interested!

Hoping to finish “Eddie and the Blue Eggs” today, before I head for Ithaca for my singing gig with Diamonds in the Rough.

Here’s what “Eddie…” looked like at the end of the day yesterday – two coats of workable fixtif so far, as I layer colors and the substrate loses bite. The fixatif really stinks up the house – not just my second-floor studio – despite the window fan I spray next to (fan blowing out of the window, of course), but yesterday was warm enough that I could spray it outside and let the fumes dissipate before bringing it back in. I’d sure love to find a non-toxic, non-aerosol way to do this!

More work needed to darken the far background, pull up details in the glass cruets, and reconcile the shoulder with the facial colors of the cat. Also need to do a little work on the drape, but I don’t want to lose all the spontaneity by overworking!